VERT’s Cybersecurity News for the Week of September 26, 2022 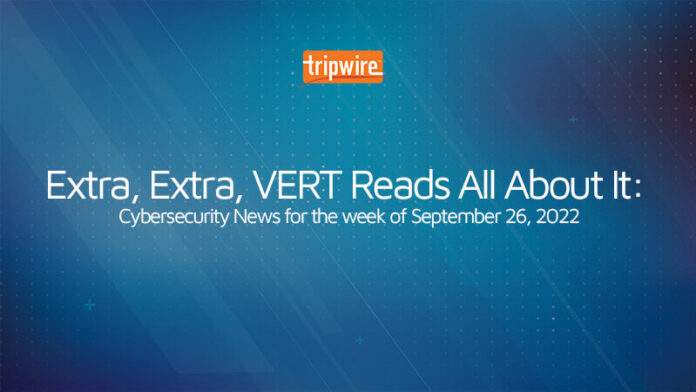 All of us at Tripwire’s Vulnerability Exposure and Research Team (VERT) are constantly looking out for interesting stories and developments in the infosec world. Here’s what cybersecurity news stood out to us during the week of September 26th, 2022. I’ve also included some comments on these stories.

UK-based cybersecurity company Sophos has warned customers that a new zero-day vulnerability affecting some of its firewall products has been exploited in attacks, SecurityWeek reports. A Friday advisory stated that versions 19.0 MR1 (19.0.1), and earlier of Sophos Firewall were affected by a critical flaw that could be used for remote code execution.

Sophos Firewall version 19.0MR1 and older were subject to a zero-day attack. The vulnerability enabled attackers to execute malicious code on compromised systems. This vulnerability was found in Webadmin and User Portal components. Sophos released a patch for this vulnerability. Also, it is recommended that the User Portal or Webadmin interfaces are not exposed to the Internet.

BleepingComputer reports that threat actors are exploiting yet-to-be-disclosed Microsoft Exchange zero-day bugs allowing for remote code execution, according to claims made by security researchers at Vietnamese cybersecurity outfit GTSC, who first spotted and reported the attacks.

There are two stages to executing code on a vulnerable system:
1. Malicious requests to the ProxyShell (not possible on fully patched systems)
2. Use the previous requests to gain access to the backend to execute code

GTSC suggests that a new rule using the URL Rewrite Rule module could mitigate these vulnerabilities. They suggest blocking requests to the Autodiscover on the Frontend by adding the string “.*autodiscover.json.*@.*Powershell.*“ to the URL Path and using the condition of {REQUEST_URI}.

Keep in Touch with Tripwire VERT

Want more insights from Tripwire VERT before our next cybersecurity news roundup comes out? Get our newsletter.