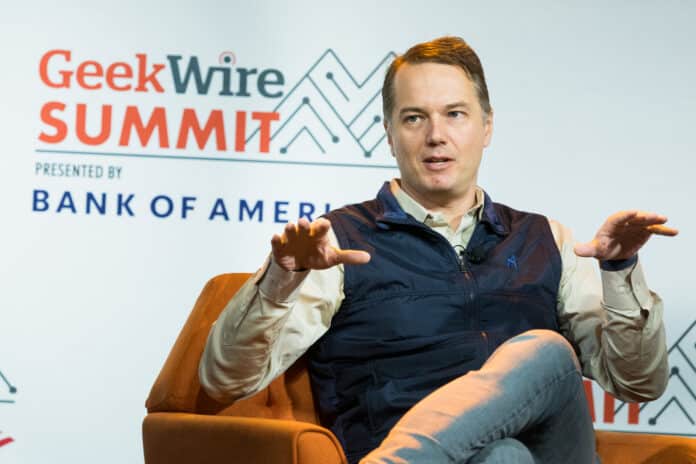 As cars and large rigs become safer and more autonomous, fully autonomous vehicles will be closer to becoming commonplace than anyone might think.

As one of the pioneers in the field, Chris Urmson has been there almost from the beginning, competing in the landmark DARPA Grand Challenge before leading Google’s self-driving car initiative. Now he’s following through on the vision as CEO of Aurora, which is developing self-driving technology for car and truck makers.

On this episode of the GeekWire Podcast, we’re playing highlights from our conversation with Urmson at the recent GeekWire Summit.

Subscribe to our podcast or listen here. Keep reading for more excerpts.

The technology underpinning this: The driver we’ve built uses a combination of sensors: LIDAR, radar, cameras, our special high-definition maps. We’ve got our proprietary FirstLight LIDAR, which allows us to see further than others can. There is a lot more computing available on board. It’s this common architecture, common hardware and software that runs everything from the Toyota Sienna through vehicles from PACCAR and Volvo.

Current operational status: Trucks are on Texas roads pulling load for customers each day. … The vast majority of the time, it’s driving itself. And it’s doing this on the freeway. It is an extremely capable and smooth driver. It does the things that you’d want other drivers to do. So if it sees vehicles trying to merge … it will make space and move over. When it sees a vehicle stuck on the side of the road, it’ll slow down, it’ll make space, and do all the things that a good conscientious driver would do.

It is not necessary to start with large rigs. You can do it for many reasons.

You have to say something about people worried about safety. This is a brand new technology. You are perfectly allowed to ask questions, have concerns and to really understand the technology. That’s perfectly normal and healthy.

Safety is a core part of our company’s DNA. It’s why we’re as transparent as we are about how we do safety at the company. We’ve shared our framework for how we’re going to convince ourselves and others that the vehicle is safe.

In some ways, the technology can be magical. The technology can see in every direction at once. And it doesn’t have the human response of foveation that happens. … There’s an incredible opportunity here for safety.

You had two options: drive I-5 from San Francisco to Seattle by yourself, or let the Aurora Driver do it for you. Which would you choose safety-wise?

What’s next: Our goal is to have every feature completed by the end Q1. At that point, the Aurora Driver does everything it’ll need to be part of a product out in the world. But it doesn’t yet do it quite well enough. We’re working towards the end of next year to be ready.

Check out the full episode for more, including the parallels between Aurora and Microsoft, plus Urmson’s thoughts on Amazon’s acquisition of Zoox, and Amazon’s investment in Aurora.