Apple Is Now an Ad Company 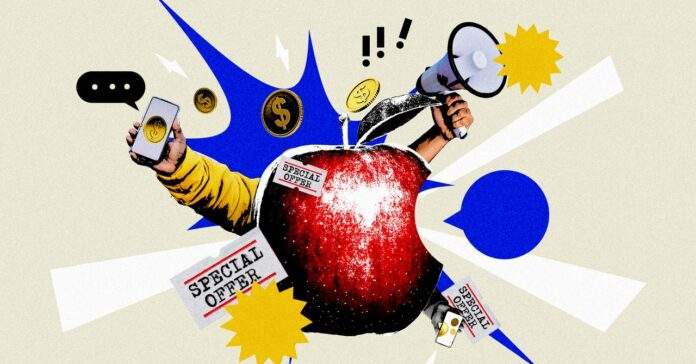 Apple spokesperson Shane Bauer declined to answer WIRED’s questions on how the company’s business is changing, the role of advertising in that, or whether ATT was related to its ad plans. “A user’s data belongs to them, and they should get to decide whether to share their data and with whom,” Bauer says. ATT’s rules apply equally to all developers, including Apple, he says, and the company “never tracks users.”

That doesn’t mean Apple’s existing ad revenue won’t keep growing. “It definitely could become a significant part of their business,” says Peter Newman, director of forecasting at Insider Intelligence, who specializes in tracking Apple. “They want to make themselves significantly less dependent on pure hardware sales.”

How big Apple’s ad business could become is far from certain. Newman sees plenty of room for growth but can’t see the company rivaling the largest digital ad giants. “I can see Apple becoming something on the level of Microsoft, maybe a little larger, but significantly behind the likes of Google and Meta,” he says. This would translate into ad revenues in the hundreds, rather than thousands of billions. Microsoft says its ad revenue is about $10 billion a year; Google, the world’s top digital ads platform, made nearly $210 billion last year, with Meta in second place with $115 billion.

Newman says that while Apple’s devices and services provide plenty of potential ad inventory, they don’t provide the scale or lucrative opportunities of Google’s search engine, Meta’s billions of social app users, or Amazon’s everything store. If persistent rumors that Apple will build its own Google search alternative prove to be true, it could lead to lucrative new advertising opportunities.

And the company’s privacy pledges could limit how far it can go with ad targeting. Evercore ISI, an investment bank, estimates that Apple’s ad revenue will reach $30 billion by 2026. That’s about the size of iPad sales in 2021, or a bit under half the company’s services revenue.

Apple has a large number of employees looking to make a living in advertising. A job ad for an ad tech engineering manager cites the company’s “complex and ever-growing platform needs that help deliver highly optimized advertising content to consumers.” As of September, Apple had around 250 employees working on its ad platforms, according to an analysis of LinkedIn data by the Financial TimesThere are job postings suggesting that there will be nearly twice as many.

Apple appears to be sensitive about the risk of being seen in too many digital ads. This could damage its brand and attract regulatory pressure. It paid for a study, published in April, by a Columbia Business School professor that threw cold water on the idea that ATT helped it compete with the internet’s ad giants.

Reinhold Kesler from the University of Zurich, Switzerland has discovered that ATT helped Apple. This feature led to some app developers shifting business models. free but sometimes with in-app payment and ads for paid models. That was to the benefit of Apple, which takes a 30 percent cut of such payments, though it’s understood that some companies have negotiated better rates.

Cusumano of MIT says Apple’s greatest challenge may be balancing its previous reputation for privacy against the data grab that digital ad businesses create. “Apple is a carefully manicured walled garden, not this advertisement-intense ecosystem like Google,” he says. This distinction can be hard to keep while simultaneously growing ad revenue. “Apple users are very loyal and forgiving,” says Kesler. “But if they push this to match their forecasts, I’ll be wondering whether users can overlook it.”