HomeAndroidMotorola Edge (2022), vs. OnePlus10T: Which one should you choose?
Android 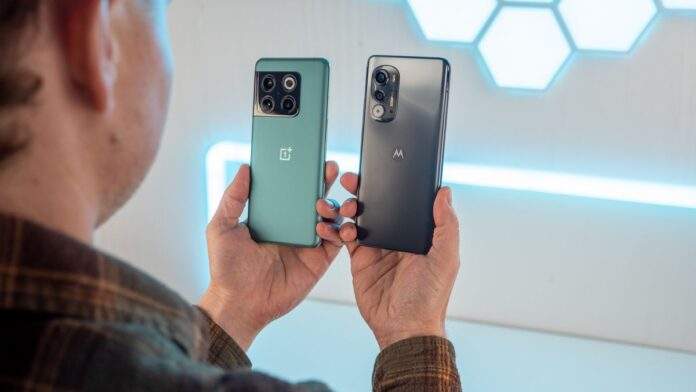 Simply on the strength of the Snapdragon 8+ Gen 1, the OnePlus 10T has one of the best price-to-quality ratios for an Android phone today. Although it doesn’t boast game-changing camera, the display and charging speed are outstanding.

After years of disappointing mid-range Moto phones, the Motorola Edge (2022) is a solid mid-range phone with two main highlights: the ultra-smooth 144Hz display that lives up to the hype and the 2-day battery life. This phone is perfect for those who want minimal software but reliable, if not exciting performance.

Both the OnePlus 10T and Motorola Edge (2022) are mid-range phones that make slight concessions compared to their immediate upgrades — the OnePlus 10 Pro and Edge+ — but are otherwise dependable smartphones that don’t feel like a compromise to use. In many ways the Edge (2022), outperforms its predecessors. The 10T brings back OnePlus’ traditional late-year style refresh.

We’ve broken down the Motorola Edge (2022 vs. OnePlus10T) to determine which phone is better. Each smartphone offers different perks for a comparable price.

Because the OnePlus 10T is a downgraded spin-off of the OnePlus 10 Pro, it mimics the look of the more expensive flagship in most ways. It features a matte glass back and thick, heavy construction. It measures in at 6.7 inches and is not something most people would want to hold. However, the bulk of this phone comes with an extremely powerful processor.

The OnePlus 10T is more fashion-oriented than the 10 Pro, thanks to its attractive colors. The OnePlus 10T lacks the 10 Pro’s notification slider. However, OnePlus explained that it made room for a new 360 degree antenna to improve connectivity. This was something we really appreciated.

There is no better Motorola Edge (2022). Its display measures just 0.1 inch smaller but it weighs 33.5g less. The cheap plastic construction makes it 0.55mm thinner. This is how the reviewer described it. “This phone was cheaply built.” This includes “atrocious haptic drivers” that don’t respond to your taps. The OnePlus 10T is able to do this without any problems.

OnePlus’ IP rating is higher than the Edge’s IP52. This means that it can withstand splashes or sprays. Gorilla Glass 5, the protection offered by the 10T, is superior to the Edge’s Gorilla Glass 3 shield.

The display is where both phones stand out. Although the OnePlus 10T does not have an LTPO display, it can still reach 120Hz and a dip to 90Hz or 60Hz when necessary. The Motorola Edge (2022), on the other hand, jumps up to an industry-leading high of 144Hz. It can also dip down as low as 48Hz.

While the Edge’s display was described as stunning and a delight for the eye by our reviewer, you will not notice any difference in real-world usage of the OnePlus 10T display. The Pixel 6a’s and Motorola Edge have a big difference, but these phones are so close that the 10T will not feel as bad.

The OnePlus 10T’s maximum brightness is 950 nits, but it was closer to 750 nits during Future Labs testing. This is a solid, but not groundbreaking, phone for the price. However, we were very impressed by the Motorola Edge (2022), which achieved 995nits in adaptive brightness during our tests.

And we loved both in-display fingerprint sensors in our tests: The OnePlus 10T  sensor “continues to be simply excellent,” while the Edge (2022) sensor has an awesome software feature that lets you drag a notification icon into the fingerprint sensor to open that app from the launch screen, which we found “incredibly intuitive.”

For just $50 more than the Edge 2022, you get a considerable performance boost with the OnePlus 10T courtesy of the Snapdragon 8+ Gen 1 — the best non-Apple chip available today. It’s as fast as the non-Plus chip released earlier this year but with much better energy efficiency to remove the throttling and overheating issues on the Galaxy S22 series.

The 16GB model was tested and scored 1025/3476 (via Future Labs) in Geekbench 5, which is a significant improvement on the Edge’s 751/2193 results. This was also true for 3DMark graphics results. The Edge (2022), on the other hand, struggled to achieve the same level of performance. In practice, you can enjoy popular Android games like Fortnite or Call of Duty Mobile without stuttering or slowdowns.

This is not an accurate comparison, as most people will purchase the 10T model with less RAM. However, even with an 8GB model you will still see similar results. Motorola’s MediaTek Dizensity 1050 chip simply can’t compete with the 8+Gen 1. This is a mid-range chip compared to a flagship one. While the Edge takes advantage of the 144Hz screen for basic social media apps it struggles to provide fast refresh rates when used with the most popular games apps.

In terms of battery life, the Motorola Edge can easily last two days with light usage, though not if you’re regularly using apps that demand 120Hz or 144Hz scrolling. But the OnePlus 10T is also quite efficient, to the point that our reviewer said it “kept [him] from worrying about battery life at all.”

Future tested both the OnePlus 10T and Edge at 60Hz. Both phones lasted just under 11 hours. The OnePlus 10T lasted almost as long at 120Hz while the Edge (2022), only lasted 9 hours at 144Hz. It’s a reasonable number, but it’s a good reminder of the fact that the Dimensity Chip is not necessarily designed to last forever if fully clocked.

Once your phone battery dips low, however, the OnePlus 10T is the phone you want to have. With the charger bundled into the box, you can reach 100% power in 20 minutes because it supports 125W charging. OnePlus excels in fast charging smartphones. It’s a fantastic perk if it is urgent and you only need to charge your phone for a couple of minutes.

Motorola Edge (2022) charging isn’t bad, but you’ll need your own 30W-capable charger since it doesn’t come in the box. You’ll need to charge it again in 90 minutes. However, it has wireless charging capabilities which the OnePlus 10T does not have.

Both phones came with Android 12 out of the box and will eventually get Android 15, along with four years of security updates through 2026. Motorola always has some neat software tricks that we like, and we appreciate that the Edge will finally get more than two OS updates — a consistent problem with past Moto phones.

The confusing nature of OxygenOS and ColorOS has raised concerns. Motorola, on the other hand, offers more stock options but is slower to update. It is difficult to decide which one is safer.

The OnePlus 10T isn’t the best camera phone in the world, and it lacks the Hasselblad branding of past OnePlus phones that symbolizes quality with a lot of users. We were also disappointed by the macro or ultra-wide cameras. But simply for the 50MP primary camera, we generally enjoyed taking photos with the OnePlus 10T, which captures plenty of fine details in low-light scenarios — even if it falls short of the Pixel 6a in camera quality.

We’ve included a sampling of OnePlus 10T photos below:

As for the Motorola Edge (2022) cameras, we found them very average in our tests. The camera is also very limited in ultra-wide shots, but we like the macro lens for closer inspections. The primary sensor’s “extremely dull and unrealistic” color scheme, lack of details in HDR photos and slow shutter speeds can all make it difficult to capture beautiful memories. Here are some sample photos.

The Motorola Edge (2022) was a more tempting buy during its first month when it had a promo price of $499. But now, just $50 less than the OnePlus 10T, it’s a bit expensive for what it offers. You’re mainly paying for the two-day battery life and 144Hz display at the expense of the cameras and the mid-range performance.

The OnePlus 10T is a near-flagship phone with slightly better camera quality, a slightly worse display, and far superior performance. The latter is why we’d recommend the 10T over the Edge, as it will make a big difference for power users over time. Plus, the extremely fast charging more than compensates for the slightly shorter battery life.

We enjoyed using both phones. But there’s a reason only the OnePlus 10T is on our list of the best Android phones.

You can’t go wrong with the OnePlus 10T, simply because of its speedy Snapdragon chip with upgraded cooling system, so it runs the most demanding games at 120Hz without overheating. And then it recharges to full in under a half hour.

Not even the most powerful 2022 flagships can hit 144Hz like the Motorola Edge (2022). It has mid-range performance, but will consistently last you for days at a time per charge.