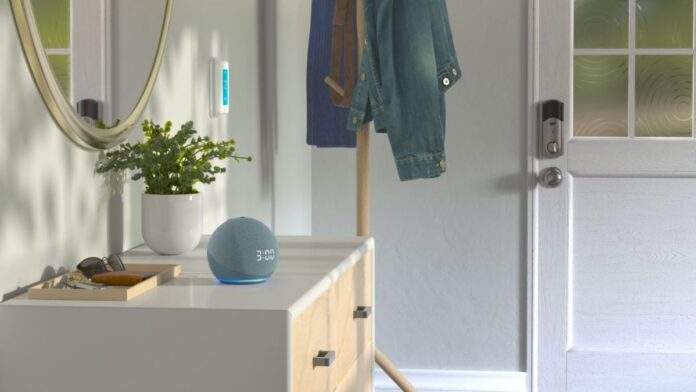 Amazon unveiled the 5th generation Echo Dot and the Dot with Clock at their 2022 Devices and Services event. These are some of the most recent updates for the small-sized smart speakers on the market. Although the speakers were the same size as the Echo Dot (4th generation) and Dot with Clock (4th generation), the new speakers have slightly bigger speakers. The sound was not bad on the older models but it is always better.

While better sound is great, Amazon has made other impressive enhancements to the product. The temperature sensor was built into both smart speakers. This is useful for controlling smart home devices like fans and smart thermostats such as the ecobee Smart Thermostat Premier we reviewed earlier this summer. A Alexa Routine that uses the indoor temperature can further automate your home.

Although you might not use the thermostat in your house, tap-to control will be very useful. You can tap on the top of the speaker to silence an alarm, turn off a timer or pause a song. You could still use your voice but it is often easier to just tap the top of the speaker than to use it. This is especially true if your goal to not disturb anyone else.

Are you a big fan of the eero routers Many users are going to love the Echo Dot’s new feature. They offer the most reliable mesh Wi-Fi routers available. Amazon now offers a new functionality which allows Echo Dots and Dots with Clock to work as extenders for existing eero WiFi networks. The new function can extend your coverage to up to 1000 square feet for compatible eero Wi-Fi systems (except eero Home Wi Fi System (1st generation).

Amazon took out a feature that many of its users would be disappointed about, even as it was adding new great features. Echo Dot with Clock and the new Echo Dot lost the classic 3.5mm headphones jack, which has been a key feature of this series since its inception. Although Amazon may know that less people use the audio port than others, it is still a problem for those who depend upon it.

One thing is common between these speakers: The LED display. It was named display, because the previous model of Amazon Dot with Clock had LEDs that only worked as clocks. Amazon’s 5th generation smart speakers now offer additional functionality. Echo Dot with Clock now has an LED display that can show you artist, title, weather and alarms.

Although the display may not be an essential feature, others might find it vital. It can prove very useful to be able to look over to see the time or name of a song. The extra $10 for the Echo Dot display may be too much depending on who you are.

Depending on your home’s decor and personal taste, the other difference between these two could be a deal breaker — color choices. Glacier White is the only common color between the two new Echo Dot models. With the standard Echo Dot dropping the Twilight Blue Dot clock, the Darker Deep Sea Blue was replaced by a more sophisticated model. The regular Echo Dot will also offer Charcoal.

The speakers are identical in sound quality, display and color. In addition to the features we have already covered, Echo Dots with Clock as well as the Echo Dots with Clock are still compatible with Fire TVs and other Echos. This allows for immersive surround sound. You can expect all the same smarts from Alexa.

It all comes down to your personal preference about how often you would use the Echo Dot with Clock’s LED display. You’ll need to spend $10 more for it than the regular Echo Dot. The clockless Dot comes in three colors, so you’ll only have to choose between two colours. You’ll still get the top-of-the-line Echo Dots in small sizes, regardless of which Echo Dot is chosen. Review of the speakers is coming soon. If we discover anything, we will update you.

Amazon Echo is the smallest and most portable device available. It has great sound quality, smart features, temperature sensor, as well as amazing sound. It’s the most affordable Amazon Echo you will find.

The $10 difference in cost between an Echo Dot standard and an LED clock is made more difficult by adding the display feature to the already-helpful LED clock. The $10 cost difference is not worth it if the display doesn’t serve any purpose.