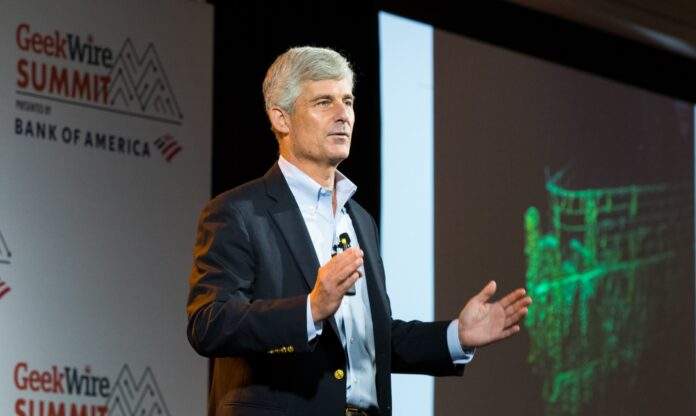 Can anything compare to seeing the wreckage of the Titanic, 110 years old, from your own eyes when it comes down to subsea adventure? Stockton Rush, OceanGate Expeditions’ president and chief submersible pilot, intends to find out.

Over the past couple of years, OceanGate Expeditions — and its sister company, Everett-based OceanGate Inc. — have repeatedly pulled off the difficult feat of sending a crewed submersible down to the Titanic, a luxury liner that tragically sank during its first voyage in 1912.

With Rush in the pilot’s seat, OceanGate’s Titan submersible carried scientific experts and paying customers down to a depth of 12,500 feet to survey the Titanic wreck and its surroundings. The voyages in 2021 and 2022 have attracted plenty of attention from media outlets — including the BBC, which is airing a documentary about the dives this weekend.

During a talk delivered at the GeekWire Summit on Friday, Rush recapped OceanGate’s business plan and looked ahead to the company’s future frontiers.

The idea was born in 2010. Rush, who trained as an aeronautical engineer but hoped to be an astronaut one day, thought about the similarities between deep-sea and space frontiers.

“We’ve had such amazing movies about space, and not as many about the ocean,” he said. “What I wanted to do with the business was just move the needle, get people excited about the ocean, and discover what was out there.”

Rush and the OceanGate crew built and maintained submersibles that were more capable over the next several years. Rush and his OceanGate team also developed a profitable business model to support their adventures.

“There were researchers who wanted to go in the ocean,” Rush recalled. “Robots, autonomous vehicles had their place, but there was a spot for humans to go down there, more so even than there’s a reason for humans to go to space. What was the model? We thought, ‘Well, there are folks who want to do high-end adventure tourism. There were people who spent $100,000 on Everest climbing or Antarctica trips. Perhaps we can merge them.’”

For the Titanic dives, OceanGate Expeditions offered customers the opportunity to participate in Titanic voyages as mission specialists — with a ticket price that eventually settled at the level of $250,000. While most deep-sea submarines can only carry two to three persons, OceanGate ensured that the submersible it built for Titanic was capable of carrying at least four people. For Titan it was five.

Rush now has thirteen Titanic dives to his credit: six in 2021 and seven in 2022. The plan calls for making return visits every year to document the ship’s deterioration — and document the deep-sea ecosystem surrounding the wreck.

For example, during this summer’s dives, the OceanGate team discovered a coral reef at a depth of 10,000 feet.

“It had all these sponges and soft corals. … We’ll be having a press release and submitting some papers on this amazing oasis of biodiversity in the abyssal plains, as the researchers like to say,” Rush said. “This thing’s incredible. It’s 20 meters high, 100 meters long, and totally unknown and undiscovered.”

The Titanic isn’t the only destination on OceanGate’s list. OceanGate has hosted dives to Hudson Canyon off New York City and New Jersey in past years. It is also planned to dive near the Great Bahama Bank, and inspect submarine wrecks.

So what’s Rush’s dream destination? “What I want to do is hydrothermal vents,” he said. Those vents are hotspots where superheated water associated with volcanic activity spews up from Earth’s crust into the cold depths of the ocean. Scientists suspect the environment may be home to unusual types of marine life.

“The highest densities of biomass on the planet are next to hydrothermal vents,” Rush said. “And they do it without the sun, all with geothermal energy and the things coming from the [interior of] The planet. The sun could shut down and there’ll still be life down there. So I really want to do that.”

When it comes to shipwrecks, the German World War II battleship Bismarck leads Rush’s wish list. The Bismarck was sunk in 1941 by the British, and now lies on the Atlantic seafloor at a depth of about 17,500 feet — deeper than the Titanic.

“Like the Titanic, it died on its maiden voyage,” Rush said. The saga about the Bismarck, just like Titanic launched a number of movies and books.

“It’s apparently in amazing condition, except for a few holes that the Brits put in it,” Rush said. The biggest challenge is that OceanGate’s Titan isn’t capable of diving to the Bismarck’s depth. An even sturdier submersible would have to be built to make that part of Rush’s dream come true.

When it comes to OceanGate’s business model, Rush still has space travel on his mind. He envisions OceanGate’s expeditions as potential training tools for commercial spacefliers heading for the high frontier. Several suborbital space travelers and spacefliers-to-be — including Blue Origin customers Dylan Taylor and Evan Dick as well as planetary scientist Alan Stern — took part in this year’s dives.

But Rush’s perspective is clearly more down to earth than it was when he first dreamed of becoming an astronaut himself.

“I think space is wonderful,” Rush said, “but I’m a little more prone to think that the oceans are really right now the critical thing, We’ve got to understand how the planet responds to climate change. It’s all in the ocean, and we know almost nothing. So I’m really excited to do that.”