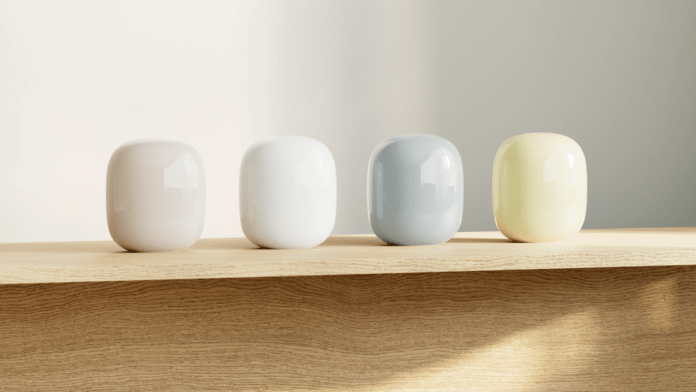 Google announced its all-new Nest WiFi Pro, 6E with leaks ahead of the October 6th hardware event. This powerful router costs $199 and comes in four new stylish colors. It will be available by October end.

While it’s more expensive than the previous model, as expected, Wi-Fi 6E is a vast improvement over the older generation, plus Google is offering 2-pack and 3-pack options with heavy price discounts.

What is Wi-Fi 6E and should I upgrade to it? Wi-Fi 6E will significantly enhance your wireless internet experience at home. 6E improves the existing Wi-Fi 6 (802.11ax) standard, delivering improved speeds, lower latency, and better performance thanks to the 6 GHz spectrum.

The biggest difference is the 6 GHz spectrum isn’t as congested with devices, routers, and other things that can interfere with your Wi-Fi signal and performance. This is similar to driving along a busy highway instead of on congested, slow-moving city streets. It provides a direct route to an internet connection that is reliable and smooth.

Wi-Fi 6E offers speeds up to two times faster than Wi-Fi 6, and Google’s new Nest WiFi Pro will take full advantage of that. Google claims the Pro is built with intelligent software that can constantly analyze your network performance and optimize your connection. It’ll even jump to a different band to improve speeds. Prioritization software then automatically boosts high-bandwidth activity like gaming or video calls.

The new Google Nest WiFi Pro 6E comes in four stylish colors; Snow, Linen, Fog, and Lemongrass, and it doesn’t have ugly antennas and blinking lights. Basically, it’ll blend in with your decor instead of being an eye sore.

Additionally, Google confirmed its new router doubles as a Thread border router and will be a Matter hub when that platform finally arrives. The new router is easy to set up for buyers. improved Google Home app.