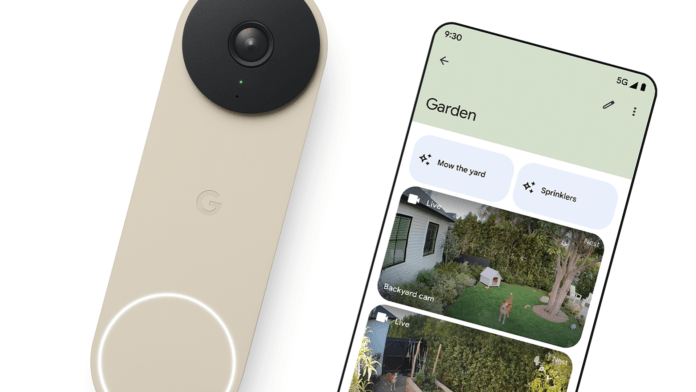 After a long wait, Google’s second-gen Nest Doorbell (Wired) is finally here. The new Google Home app has been announced. It places more emphasis on routines and camera feeds. Google Home will also be coming to Wear OS in the near future.

Google promised that there would be a wired version of the Nest Doorbell Battery (Battery) shortly after it was launched in late 2021. Well, we’re closing in on the end of the year, but Google kept its promise. Second-generation Nest Doorbell (Wired) Available for $180

The main feature that I find most appealing about this doorbell is the 24/7 continuous recording. As you may remember, the Nest Doorbell (Battery) doesn’t support continuous recording because of thermal limitations—it doesn’t like to get too hot or too cold. This wired doorbell can run throughout the day which is amazing.

You will need to have a Nest Aware Plus subscription Continuous recording You can’t record more than five minutes of clips without this subscription.

But of course, the Nest Doorbell (Wired) isn’t just a one-trick pony. You can keep up to 1 hour of local footage. Only in exceptional circumstances The built-in speaker allows for 2-way audio and Wi-Fi outages. Nest Doorbell (Wired), which supports package, facial and pet recognition, also offers Activity Zones that alert you when there is movement in a specific area of the camera feed.

Now you can create Household Routines using the Nest Doorbell. For example, you can set up a smart light that turns on whenever the doorbell rings. (Google hasn’t confirmed if Household Routines works in conjunction with Activity Zones, facial recognition, or other advanced features).

It Nest Doorbell (Wired) It is currently available for $180. The Nest Mini speaker can be used in lieu of your existing mechanical doorbell. Bear in mind that the Nest Doorbell’s best features are hidden behind a Nest Aware Plus subscription.

Google Home will soon undergo a major redesign. Available to Public Preview users in the coming weeks, this redesign places a huge emphasis on live camera feeds. It’s also Matter-ready, and in 2023, it will support a full script editor for greater control over routines.

As explained by Google, the redesigned Home app offers a “Nest camera controller.” This gives you large camera previews across the app, but it also lets you quickly scrub through clips (and find important moments that are highlighted by AI). The Google Home app will also organize videos by their subjects—people, packages, animals, vehicles, and so on.

There’s also a new “Automations” tab in the Google Home app. Google has placed device automation at the forefront of its efforts, encouraging developers (hopefully) and users to make full use of their smart homes.

And for advanced users, Google will launch a “script editor” in 2023. You can use this tool to create, verify, and activate strong routines for smart homes. We’re just not 100% sure how it works. Either way, Google says that the script editor unlocks “100 new features and capabilities,” and smart home fanatics will surely appreciate the extra control.

Customizable “Spaces” will also arrive for the Google Home app in 2023. Here’s the idea; instead of searching Google Home from head to toe just to find one device, you can add devices to select “Spaces” that are easy to find an access. If you use a bunch of smart plugs and lights in your entertainment center, for example, you can toss them in a custom “Space” for easy access.

As promised, Google Home will be coming to Wear OS. The wearable app will arrive in the “coming weeks,” probably when the Pixel Watch ships in mid or late October. Interestingly, Google also says that it’ll launch a browser-based version of Google Home, though this web interface seems to only offer camera controls.