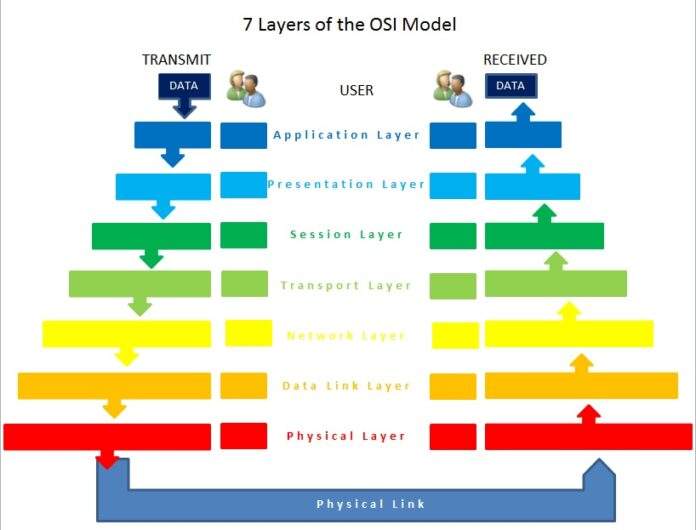 
Each layer handles a different networking function. Administrators may use this standard to aid them in visualizing networks, identifying problems and determining which new technology applications they should be using. Many network equipment companies advertise which OSI layer they can use with their products.

OSI became an internationally recognized standard in 1984. Even with the many changes made to network implementations since publication, it is still pertinent today. This model supports cloud, edge and IoT connectivity.

This article will cover each OSI level in detail. Start at the bottom with Layer 1.

Physical equipment is the foundation of every network. This layer houses the hardware needed to communicate with switches, cables and routers. The data is sent as either a stream of binary digits (0 or 1) that the hardware prepares to receive. This layer is used to describe the signals that are used to encode data on wires. For example, a 5 volt pulse would indicate a binary number 1.

If the physical layer contains errors, data cannot be transmitted. The possibility of a connection being cut off could be caused by a missing or incorrect power supply. Problems can arise when two components have different ways of encoding data values. Wireless connections could be affected by a weak signal.

Communication between devices that are connected to the same network is the second layer in this model. This establishes an interface that permits data exchange via a protocol. Layer 2 houses many network switches.

At some point, the data link layer will send bits to physical layers. It is situated above the hardware. The data layer can correct physical transfer problems by performing basic error detection and correction. There are two layers that define the responsibilities. Logical Link ControlFrame synchronization and error detection are handled by. Media Access Control (MAC), which makes use of MAC addresses to restrict the number of devices that can be granted permission to transmit data.

Data transfer is possible between networks using the network layer. It is redundant in situations where multiple devices are connected to the same network.

Network layers receive data from other levels. This data is then divided into packets, which are transmitted. As a response, packets are received by the remote network. The packets then get reassembled into usable data.

Network layer is where many important protocols first appear. These protocols include IP, ICMP, routing and path determination. These systems make it easy to communicate with other networks. It is possible to make mistakes at this level. The messages may fail, or they might not work again.

Transport layer coordinates data transfer between devices. It is up to the transport controller where and when data should go.

Layer 4 hosts UDP and TCP. This layer provides port numbers which enable multiple communication channels to be exposed by devices. Layer 4 houses load balancing. This allows traffic to flow from one port on the target device to another.

Transport mechanisms are expected to ensure communication success. For the purpose of recovering lost packets, and to attempt unsuccessful transfers again, there are strict error controls. The flow control feature is used to make sure that data not sent faster than bandwidth permits does not overload the remote device.

Layer 5 allows two devices to communicate continuously. Session can be used for new connections and to negotiate their lengths. After the exchange of data has ended, the connection can then gracefully be terminated. The layer makes sure that sessions remain open long enough for data transmission.

Layer 5 has the responsibility of controlling checkpoints and monitoring them. Sessions can be used to create checkpoints in order to facilitate the transmission of progress updates or resumable transmissions. Checkpoints are created for file uploads every few megabytes. This allows the sender to keep the transmission going at the same point even if the connection is lost.

Many important protocols are found in Layer 5, including logon and authentication technologies such as LDAP or NetBIOS. These protocols create semi-permanent communication links to control an end-user session for a specific device.

This layer creates the data needed for the next layer. After data is transferred from the hardware via the transport and through the data link, the system will be ready to use high-level components. The presentation layer completes this process by formatting any data that might be needed.

TLS, a key technology in the presentation layer, is an example of this. Prior to requests reaching the network client, encryption of data and verification of certificates are performed. It allows you to access information with the confidence it is genuine.

App layer is the top layer in the stack. It represents functionality, as it is perceived by network users. OSI provides an interface to facilitate complete data transfer without having to worry about data connections, data hardware, session, compression or data links.

This layer doesn’t relate to client-side software such as email clients or web browsers. An application, in OSI terminology, is any protocol that permits complex data to flow through layers 1 through 6.

The list of OSI Network Protocols It contains HTTP, FTP, DNS, and other information. These advanced mechanisms permit data transfers directly between an original device (or server), and a distant one. These layers are simple to comprehend.

These OSI layers describe how data can be transferred across computer networks. You can identify the source of the problem by understanding the roles and responsibilities for each level. This will allow you to determine which components are most appropriate.

OSI can be described as an abstract model that doesn’t necessarily correspond with specific network implementations. The TCP/IP Protocol is a simple system that uses only four layers: Network Access, Transport (Udpip protocols), Application and Transport. These abstractions absorb the equivalent OSI levels: The application layer spans OSIs L5 to L7, while the L1 and L2 layers are combined in TCP/IP’s concept of Network Access.

OSI still applies, even though it is not directly applicable in real-life. OSI is so well-known that OSI is used by administrators from all walks of the organization. Because of its high abstraction level, it is still relevant despite the many new networking paradigms being adopted by so many. Knowing the seven layers, and their responsibilities can help you to understand data flow in the network as well as find integration opportunities.

How to configure Layer3 EtherChannels